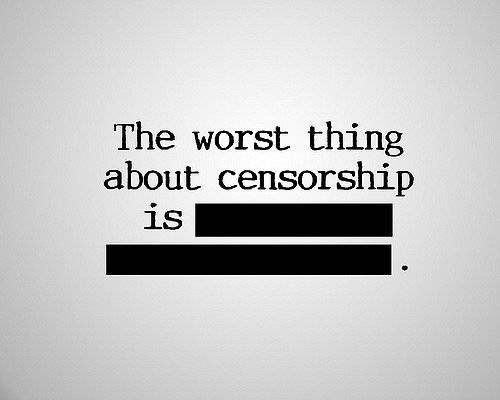 The guidelines issued by the Central Government under the Act and the principles therein guide the CBFC in forming opinions and making decisions with respect to certification.[7]  The Guidelines expound the permissible restrictions under the constitution and the provisions of the Act. They broadly capture the principles based on which prior restraint may be imposed on films submitted for certification.

The CBFC will not give a certificate for public  exhibition of the film or a part if it:

The said principles guide the CBFC in assessing films for grant of certificates, or their rejection. In other words, the said principles form the basis for  restricting, or cutting  film expressions from  public exhibition.

As per the Guidelines of the Central Government, the objectives of the film certification are as follows:

i) the medium of film remains responsible and sensitive to the values and standards of society;

ii) artistic expression and creative freedom are not unduly curbed;

iv) the medium of film provides clean and healthy entertainment; and

v) as far as possible, the film is of aesthetic value and cinematically of a good standard.

In pursuance of the above objectives, the CBFC must ensure that:

i) anti-social activities such as violence are not glorified or justified;

ii) the modus operandi of criminals, other visuals or words likely to incite the commission of any offence are not depicted;

a) showing involvement of children in violence as victims or perpetrators or as forced witnesses to violence, or showing children as being subjected to any form of child abuse;

b) showing abuse or ridicule of physically and mentally handicapped persons; and

c) showing cruelty to, or abuse of animals, are not presented needlessly.

iv) pointless or avoidable scenes of violence, cruelty and horror, scenes of violence primarily intended to provide entertainment and such scenes as may have the effect of de-sensitising or de-humanising people are  not shown;

v) scenes which have the effect of justifying or glorifying drinking are not shown;

vi) scenes tending to encourage, justify or glamorise drug addiction are not shown;

a) scenes tending to encourage, justify or glamorise consumption of tobacco or smoking are not shown;

vii) human sensibilities are not offended by vulgarity, obscenity or depravity;

viii) such dual meaning words as obviously cater to baser instincts are not allowed;

ix) scenes degrading or denigrating women in any manner are not presented;

x) scenes involving sexual violence against women like attempt to rape, rape or any form of molestation or scenes of a similar nature are avoided, and if any such incidents are germane to the theme, they shall be reduced to the minimum and no details are shown;

xi) scenes showing sexual perversions shall be avoided and if such matters are germane to the theme they shall be reduced to the minimum and no details are shown;

xii) visuals or words contemptuous of racial, religious or other groups are not presented;

xiii) visuals or words which promote communal, obscurantist, anti-scientific and anti-national attitude are not presented;

xiv) the sovereignty and integrity of India is not called in question;

xv) the security of the State is not jeopardized or endangered

xvi) friendly relations with foreign States are not strained;

xvii) public order is not endangered;

xviii) visuals or words involving defamation of an individual or a body of individuals, or contempt of court are not presented; … and

xix) national symbols and emblems are not shown except in accordance with the provisions of the Emblems and Names (Prevention of Improper Use) Act, 1950 (12 of 1950).

The CBFC must also ensure that the film:

The said guidelines apply to titles of films as well.

At a general level, the guidelines seek to balance the right to freedom of expression in films on one side, and the national, social and public interest on the other side. To bring objectivity into an otherwise subjective balancing act, the Guidelines not only give direction to the CBFC by specifically outlining instances where restraint may be required, but also lay down    the context in which films must be judged. The film must be seen as a whole in the context of what it addresses, and must be assessed based on contemporary standards of the society. Many of the aforestated principles are the outcome of Court decisions in India and across the world.

While determination of whether a film includes unnecessary instances of abuse of children,violence to animals, abuse of  handicapped and rape may be comparatively less subjective, others such as dual meaning words,  human sensibilities, sexual perversion, public order, morality, etc., are fraught with great subjectivity. The extent of subjectivity inherent in the process of certification has over the years led to disputes with respect to classification of films, cuts imposed and rejection of certifications among others. These disputes have raised legal, ethical and philosophical questions about the need for a censor such as CBFC, the defacto role of CBFC, and the competency of a Government appointed body like CBFC to make decisions that may have the effect of diluting or depriving the very important fundamental right to freedom of speech and expression. The Udta Punjab, Had Anhad and Lipstick under my Burkah cases are some instances where the film makers not only disputed CBFC’s decision, but also raised  questions with respect to the objective and process of censorship.

[7] The principles for guidance in certifying films issued under Section 5B(2) of the Cinematograph Act, 1952,  available at http://cbfcindia.gov.in/html/uniquepage.aspx?unique_page_id=1, last visited on 23.03.2017.