One of strategies prevalent in the pharmaceutical sector is to invest in research through which new chemical entities and new products can be invented which will help to challenge the existing patents successfully. However, with the amount of money involved in this kind of strategy, a lot of other strategies have emerged by which pharmaceutical companies mainly generics do business, one of which are challenges of patents under Para IV of the Hatch Waxman Act, 1984 (hereinafter referred to as the  “Act”).

Whenever a new drug is to to be released in the market, the innovator drug applicant is required to include in their new drug application (NDA) information about the patents that claim the drug product which is the subject of the NDA. FDA publishes this patent information in the Orange Book. Once a pharmaceutical company is interested in bringing a lower-priced generic versions of previously approved innovator drugs, the company is required to file an abbreviated new drug application (ANDA). The data provided in the ANDA is used by the FDA for review and approval of the generic product. Generic drug applications are called “abbreviated” because they are generally only required to scientifically demonstrate that the product is bioequivalent; and generally not required to include preclinical (animal) and clinical (human) data to establish safety and effectiveness.

Any ANDA which is filed with the FDA also includes a patent certification which should have one of the following statements as per section 505(j)(2)(A)(vii) of the Act.

(I) no patent information on the drug product that is the subject of the ANDA has been submitted to
FDA;

(II) that such patent has expired;

(III) the date on which such patent expires; or

(IV) that such patent is invalid or will not be infringed by the manufacture, use, or sale of the drug product
for which the ANDA is submitted.

The most significant certification for generic companies is the last one which is known as the paragraph IV certification. Once the ANDA is filed by the generic company, the FDA has 60 days to accept the same and generic filer is thereafter required to send a notice to each of the patent owner and to the holder of the approved NDA to which the ANDA refers. Once the notice has been served, the patent holder has 45 days to sue the generic manufacturer to automatically trigger the 30 month stay of FDA approval of the ANDA (earliest of the end of 30 months or after a court decision or patent expiration). Once an ANDA applicant prevails in the litigation, the ANDA applicant receives a 180-day period of marketing exclusivity which is the driving factor in the steady increase of first to file paragraph IV filings in the US over the years. As per the report released by RBC Capital Markets titled “Pharmaceuticals Analyzing Litigation Success Rates”, the number of first to file lawsuits have gone up to 65 in 2009 from 51 in 2008.

As per the report, the overall success rate for the generic industry is 48% based on court decisions and 76%when patent settlements and dropped cases were also accounted. Perrigo emerged on top in the best challenger list with 100% of its cases either won or settled. 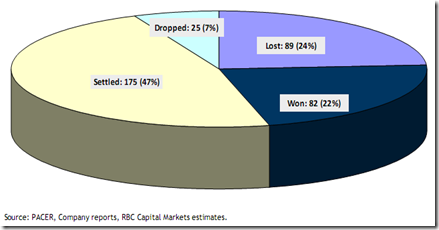 Another interesting point in the report was the inclusion of two Indian companies in the top 15 best patent challengers. Ranbaxy featured 12th on the list with a success rate of 63% and Dr. Reddy’s closely followed at 13th position with a success rate of 61%. However, both Ranbaxy and Dr. Reddy’s winning percentage based on court decisions was only 22%.

Another important statistic which featured an Indian company was the top five authorized generic player (2000-2009) list which mentioned Ranbaxy at number 5.

From the report it is clear that the trend is here to stay and the number of Paragraph IV filings will only increase with time. However, another important thing which should be noted that settlement has become the preferred choice with a high 47% of all cases ultimately getting settled. The settlement trend is also another way of reducing the cost of expensive litigation and providing surety to the company from any threat in the future.