In the just concluded AeroIndia 2011, I had a chance to walk up close with the flying machines. Hidden among the multi-million supersonic fighter and bombers was an ordinary looking Maruti 800 with a few extra appendages, as seen here. 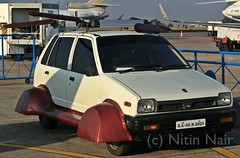 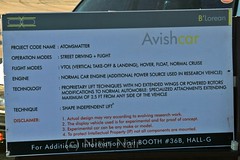 This is a product from a Bangalore based company called the B’Lorean (the name seems to be a combination of Bangalore and DeLorean, the car made famous by the Back to Future Series) headed by K. Vishwanath. While I am not aware of the technical details and working of the flying car, my eyes were drawn to the accompanying technical specifications displayed beside the car.  While listing down the technical details and capabilities of the Avishcar,  the last line of the disclaimer stated that “To protect Intellectual Property, not all components are mounted”.

This is a clever stratagem adopted by the company, as they might not have applied for a patent either for the entire car incorporating their technology or the individual components.

The Indian Patent Act, 1970 does contain exceptions covering public display and working of a product before applying for a patent (S. 31 and 32 respectively which have been reproduced below) with a grace period of twelve months.

if the application for the patent is made by the true and first inventor or a person deriving title from him not later than twelve months after the opening of the exhibition or the reading or publication of the paper, as the case may be.

An invention claimed in a complete specification shall not be deemed to have been anticipated by reason only that at any time within one year before the priority date of the relevant claim of the specification, the invention was publicly worked in India –

if the working was effected for the purpose of reasonable trial only and if it was reasonably necessary, having regard to the nature of the invention, that the working for that purpose should be effected in public.

There is no legal precedent making clear as to what constitutes a technical/industrial exhibition. Keeping in mind the fact that AeroIndia 2011 might be construed as a public display and not as a technical exhibition, it was a very prudent move on the part of B’lorean to include disclaimers that all necessary components have not been mounted and has given us some food for thought.